As an educator, it’s really important to learn to appreciate other people’s points of view — even if you disagree with them.

"I once had a seasoned teacher tell me in early September that he could already tell which of his students would have to repeat kindergarten," says Professor Sue Ellen Henry, education. "This really struck me. It turned out he was basing his predictions largely on corporeal performance. How could he expect a child's body movement to predict academic capacities?"

Cultural and societal expectations may have been at the root of this teacher's prognosis, says Henry. Now, as an educator, she asks her students to examine their own preconceptions.

Henry's approach to teaching is both innovative and experiential. Instead of merely discussing issues of identity, each student in her Multiculturalism in Education course writes an autobiography, describing themselves in terms of race, social status, gender and any other qualities they find important. She asks them to provide headshots, separates the photos from the essays, and gives the materials to Professor Joe Meiser, art, who has his students create portraits based on the photographs. Elements from an autobiography make up the background of each. "In almost every case, the photo and autobiography come from different sources," Henry explains. "So what does that mean for the subjects? Could your story be my story? What does that mean for the distance between us?"

Above all, Henry wants her students to be more open minded. "All people are works in progress. It isn't right to foreclose on anyone and, as an educator, it's really important to learn to appreciate other people's points of view — even if you disagree with them."

Another group of her students explored issues of identity by creating a digital representation of what they consider the most salient aspects of their personalities. "Creating the films gave them a chance to work with Final Cut Pro, a professional editing tool," says Henry.

For her Democracy in Education class, Henry takes an appropriately inclusive approach by asking the class to co-construct the syllabus, assignments and rubrics for grading. "Working with students to decide how the course runs makes them think about teaching in a very real way," she says. "If things aren't going well, we make adjustments. Just like in life. My challenge to them is to think differently about how they become educated rather than schooled."

Bucknell offers both the Bachelor of Arts and Bachelor of Science in education. A major in education within either degree program can prepare students to pursue careers in teaching. It also provides the necessary background and preparation for graduate work in an array of disciplines, and for careers in law, business and public service

Learn more about the Department of Education

With 48 majors, you can fully immerse yourself in one area — or combine the fields you love into a double major. Pair Spanish with music, or education with public policy. Pursue botany and theatre, or environmental studies and classics.

Check out the College of Arts & Sciences 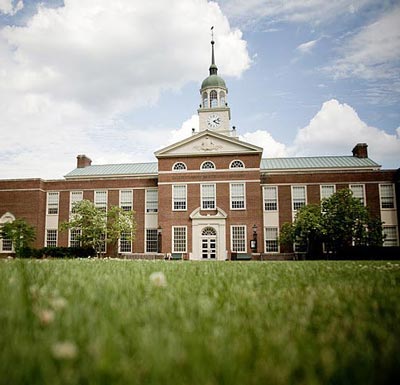 Make the World Your Campus

Recently, education students have studied in Denmark, Florence and Bologna. If you will be student teaching, consult closely with your academic adviser to plan a summer, semester, or year-long study abroad opportunity.